skip to main | skip to sidebar

Today saw the Conservative party conference come to an end, the first party conference to be held in the city by a party in power.  There were some interesting announcements as might be expected for a newish government, including the proposal to end universal child benefit and speculation that a married couples allowance would be reintroduced to help offset some of the unfairness of the change.

Meanwhile last week saw the biennial Labour party conference in Manchester which included the announcement of Ed Miliband as leader, beating his older brother David by 0.1%.  David did not seem to take the defeat graciously, particular as he challenge Harriet Harman for applauding Ed when he claimed the Iraq war was wrong.  This was proof that Ed was the correct choice for the party: David, throughout the campaign, often failed to answer serious questions and kept a very safe, Blairite line on policy and announcements.  Winning the party nomination requires a person to enthuse the grassroots, but all David seemed concerned with was continuing failed New Labour ideology. While Ed may well move back to the centre now he has won the nomination, he demonstrated he understood where the party was now and where the problems lie.  We may have an interesting few years ahead.

Today marks the start of the Commonwealth Games, but so far all we have heard from the British media is how it has been beset by problems.  One cannot help feeling there is a touch of the old colonialist attitude towards the reporting of the build up to these games: how dare those darkies believe they can hold a successful international competition!  An excellent article by Mick Hume makes this point.

This of course follows on from the criticism of Beijing 2008 which, I can guarantee, in two years time will have provided a better competition than our overrated dump of a capital (what else did Seb Coe mean when he said London would not match the Beijing Olympics).  Want to see how well we can organise things?  How about a major golf competition in Wales which has been delayed by the surprising element of weather. Who would have though there would be rain in Cardiff in October?  Not the organisers of a British hoster Ryder Cup.

And if Britain is so great at hosting major international sporting events as the BBC and other media outlets are so quick to have us believe, what did Olympic president Jacques Rogge mean in 2002 when he said the Manchester Commonwealth games had gone a long way to restoring Britain's credibility in terms of hosting big sporting events.

Reading this article on the new high-tech car park at the futuristic (Borg - sorry it had to be said) Cube complex in central Birmingham reminded me of the car park in the original Bullring that heralded the future. As the following article quotes the idea was simple:

Motorists left their car with a uniformed member of staff who would then drive it into a huge lift serving each of the four floors. It stopped at a level with spaces and the car would be driven out onto a trolley, then pushed to the nearest available space where it would be placed.

Unfortunately the idea was too labour intensive and was abandoned after three days, leaving the car park empty until it was demolished to make way for the new Bullring. Hopefully the Cube's version, said to be the largest car park stacking system in the UK, will be more successful.

Merry Christmas One and All 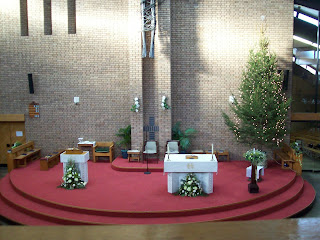 The People's Republic wishes its readers a happy and holy Christmas. May you enjoy the festive period with your family and friends.
Posted by Louis at 22:54 4 comments:

I was slightly disappointed that the topic for the third Blog Action Day ended up being Climate Change, as I was under the impression that was the same as the topic chosen on the first blog action day two years ago. In fact I was wrong and it was actually about the Environment, which is obviously very similar. I used the day two years ago to urge more political progress on the issue of Global Warming. However, in the last two years, I have grown increasingly sceptical about it.

Sensationalized stories like this one from the supposedly unbiased BBC do not help. As pointed out on the Stirrer forum, all I need to do is rearrange and juxtapose a few sentence to show what nonsense it is.

This route is usually frozen but rising temperatures in the region caused by global warming have melted much of the ice allowing large ships to go through.

But the once impenetrable ice that prevented ships travelling along the northern Russian coast has been retreating rapidly because of global warming in recent decades.

The passage became passable without ice breakers in 2005.

It was a rather strange site waking up this morning to see some of the top half-marathon runners racing past my house but it was certainly an exciting and welcome one. The course was quite disruptive to people living in South Birmingham particularly if one happened to be, as I did, cut off by the course but had been picked to provide a potential record breaking time. Unfortunately that did not happen on this occasion (not helped of course by Paula Radcliffe having to pull out at a late stage) but I understand the winner of the international female race broke her own personal record.
Posted by Louis at 22:43 No comments:

West Midlands Regional organisor Mike Bell has been well and truly caught with his pants down. After years of denying the BNP have any links to nazism and proudly boasting that his family had "a pround history of opposing the Nazis in both world wars" (sic) and of collecting money for the Royal British legion, he was photographed this week at a Neo-Nazi Rock concert in Germany where he was the headline speaker. His reaction on the Stirrer forums was really quite disturbing:

prod, probe, attack, destroy me , just be aware that the preservation of the martyr within me will live on.You will all see me very soon unleash the wrath of gods heil Odin, Heil Thor.I shall go down in flames,remember my name it will be etched into your memories forever.You will be part responsible,an unwanted trophy which you will have to take the credit for.

follow me on Twitter
Baldwin thought Europe was a bore, and Chamberlain thought it was only a greater Birmingham. Winston Churchill

Any news, views or gossip about Brum? Link to me and want one back? Let me know at the above address.

History of the People's Republic

The President of the People's Republic of Birmingham